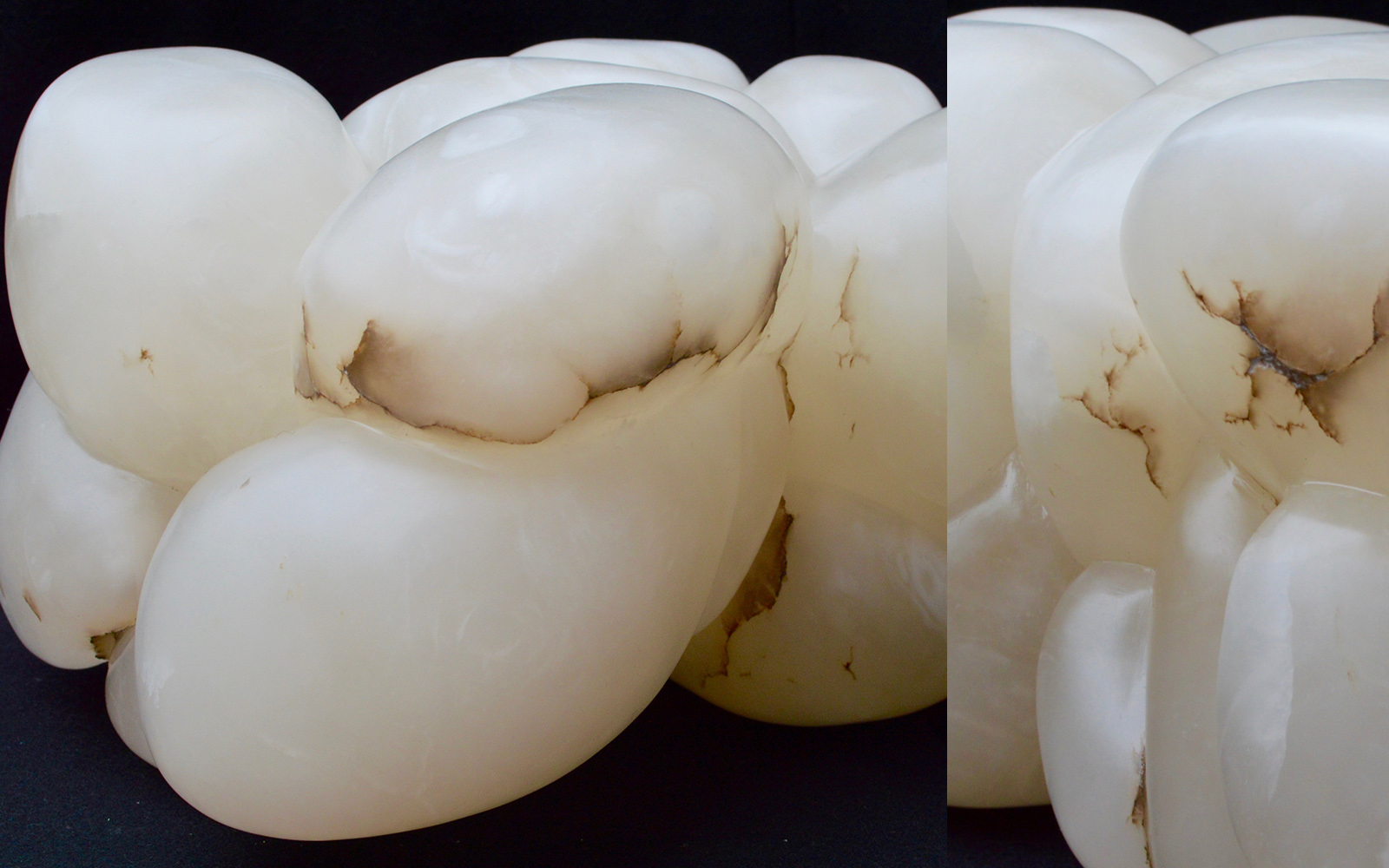 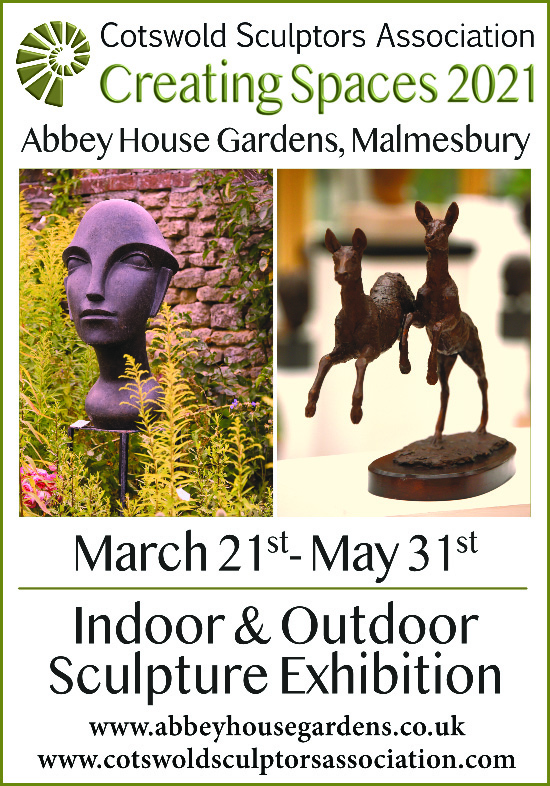 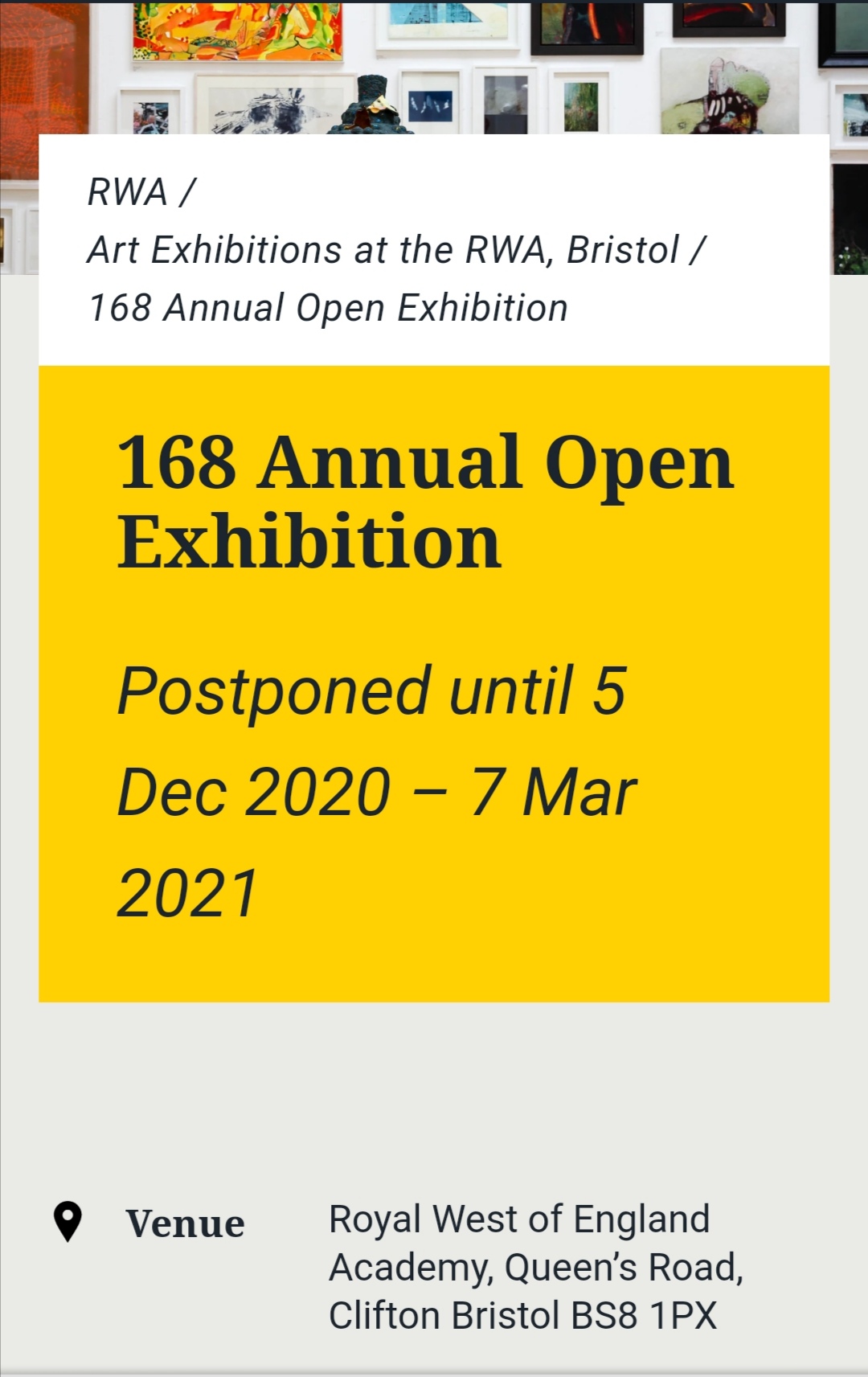 A selection of Sculptures

Testimony of the dispossessed 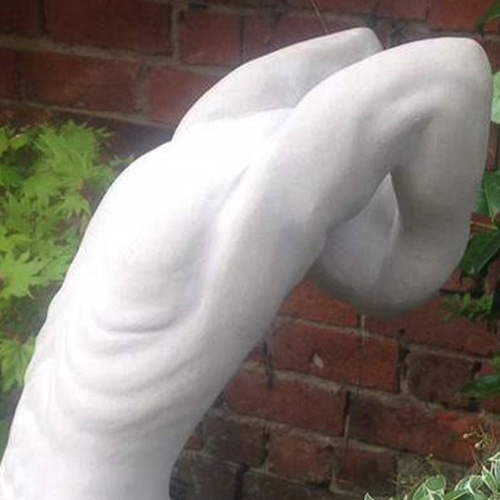 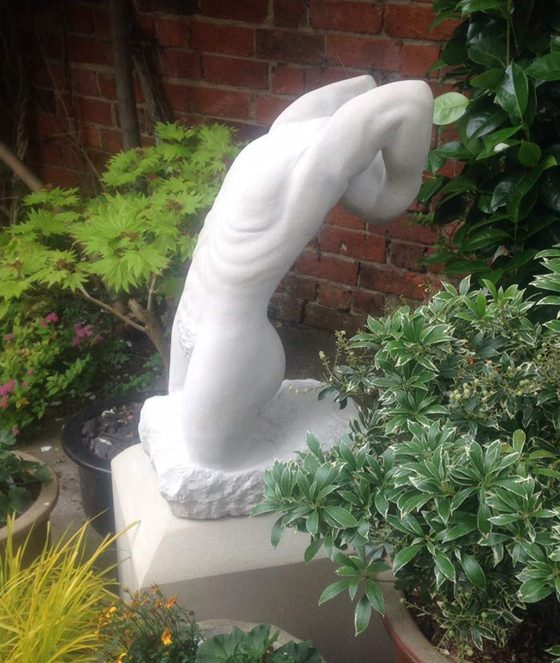 This piece represents the anguish and despair of depression. The inspiration for the pose came from Steve's story who describes depression as something which never completely goes away.

I carved this piece on this theme to raise awareness of the mental health issues of men, as we recently lost two friends through suicide. According to The Public Health England Suicide Prevention File 2015 Gloucestershire's suicide rate remains significantly higher than the national rate : Gloucestershire's rate is 11.5 people per 100,000 compared to England's 8.8 per 100,000 (a standardised average from 2011- 2013). Suicide is 80% more likely to occur in males than females (ages between 35 and 49) which correlates with unemployment, living alone (40%) and being white British (84%).

'Agonia' is a Greek word which means severe mental struggle, agony or anguish (online Greek lexicon). I chose the title 'Agonia' as it is used to describe the agony that Christ endured in Gethsemane before deciding to die on the cross for the sake of all humanity. The burden and agony were so great that he sweat drops of blood; a condition called hematohidrosis which was also recorded to have happened in the 1st World War moments before men were sent over the trenches into battle.

The sculpture is naked due to his complete abandonment to his pain. He is vulnerable. His thighs are visible but he is up to his knees in the mire of despond. The shape of the head resonates with 'The Scream' by Edvard Munch. 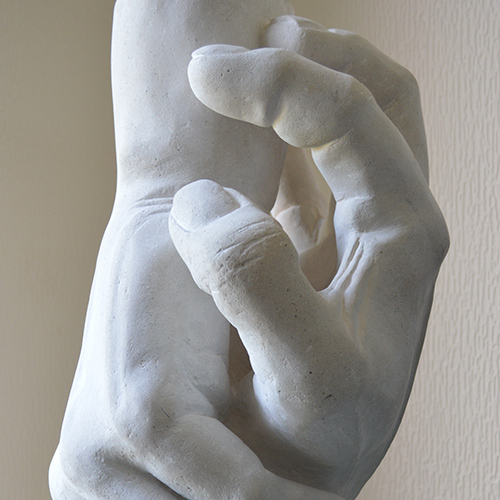 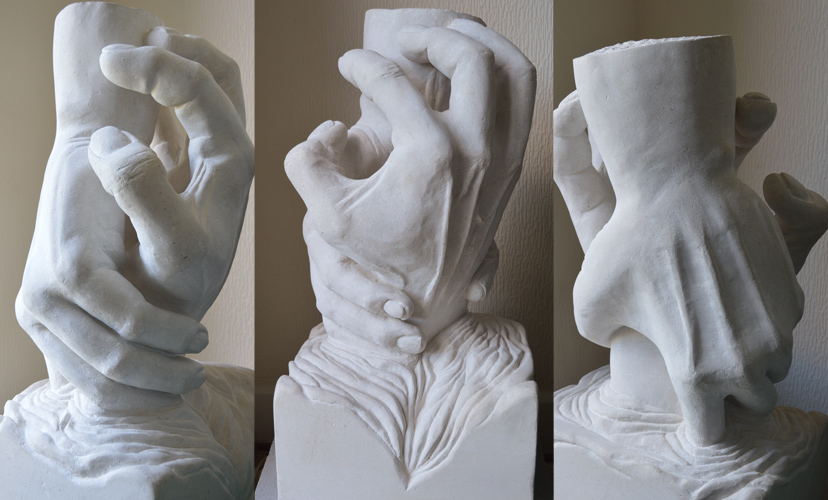 This sculpture represents the story of a Gloucester man who was part of the local drug culture. He saw that continuing with addiction would kill him. So he made a decision to change. With new knowledge of the love of God and help from two friends, he kicked the addiction.

I chose this design and the title 'Connection' to represent the hand of God reaching down into the storms of humanity to bring rescue. Just as Jesus reached down for the fisherman Peter when he was drowning in the waves of the storm.

Professor of Psychology Bruce Alexander found that connection was important to the well being of rats. Firstly, he placed a single rat in an empty cage with two sources of water, one containing cocaine or heroin the other pure water. Under these circumstances the rat overdosed and died. However, if the rat was placed in a rat park with other rats, although they tasted of both, the laced and pure water bottles, most shunned the drugged water and none of them died. The conclusion was that rats needed community and an engaging environment to be able to avoid the fatal consequences of addiction.

Time magazine found that only 5% of soldiers, who had displayed addiction in the Vietnam war, ever used drugs when they were returned to their pleasant American home surroundings with family and friends. So the opposite of addiction is not simply abstention but it is more about social connection.

In 2015, close to the end of carving this piece, the news was showing shocking images of the tragic plight of thousands of Syrian refugees drowning as they sought help on Western shores and their need of help. 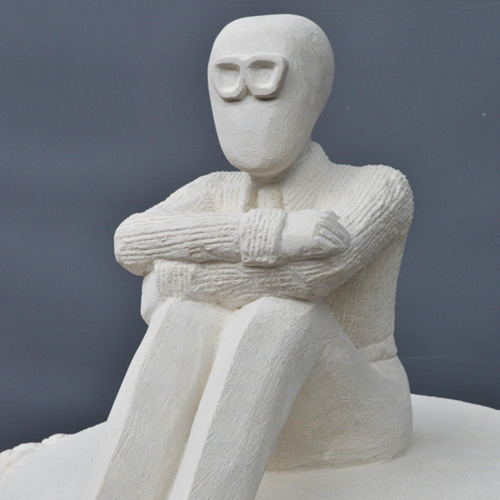 This sculpture is of a man sitting upon a coin beneath which there is great suffering for men, women and children. As I was finishing this piece Donald Trump was delivering his speech as president elect of the USA.

The inspiration for this sculpture came while I was watching BBC One's Poldark and saw the Warleggan family oppressing the poor for financial gain.

Capitalism presumes that where there is wealth it will 'trickle down' to the less well off. However, in this particular sculpture this is not the case. This man has exploited those who are less fortunate, for his own gain. This is regularly illustrated in the news for example Philip Green took money out of BHS funds resulting in the depletion of the pensions for thousands of employees while his yacht, 'Lionheart', alone is valued at £100m. There are also the austerity measures where politicians, predominantly past members of the Oxford Bullington boys club, squeeze the provision for the poor resulting in the rise of food banks whilst many of the richer companies avoid paying millions of pounds in taxes.

I watched the Ted talk called, 'Does money make you mean?' It found that those who were given a random, unfair advantage came to believe it was theirs by merit leading to a false sense of entitlement and elitism and subsequently a decrease in compassion, empathy and pro-social behaviour. Jesus said, 'What does it profit a man if he gains the whole world but looses his soul'. This sculpture shows the pierced hand of Christ beneath the coin as he too was betrayed for a mere 30 pieces of silver. Jesus says 'blessed are those who know they are poor because theirs is the Kingdom of God'. 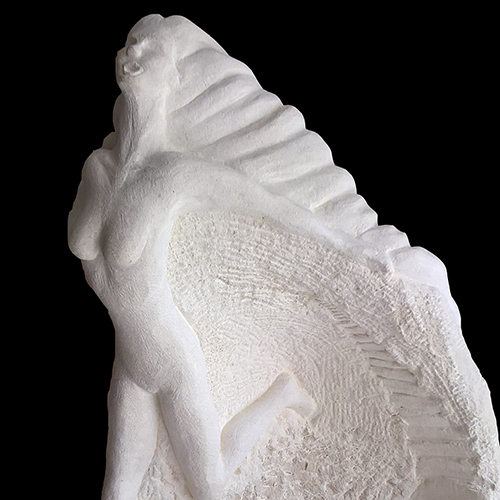 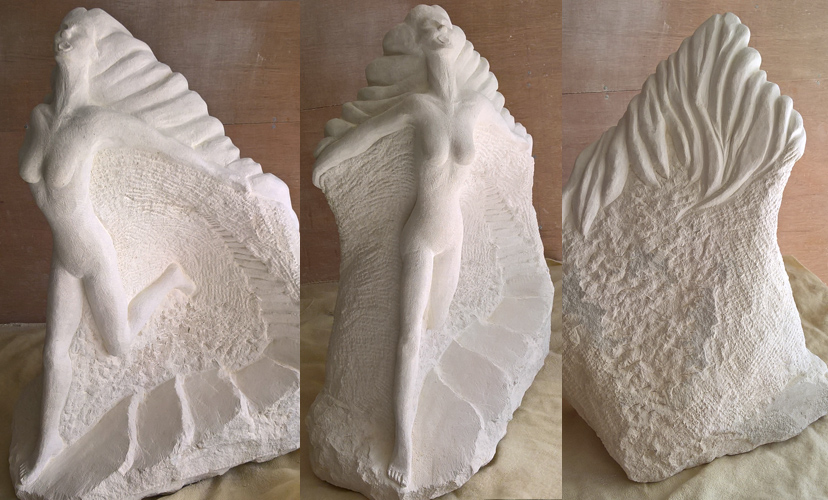 This sculpture was inspired by a young woman who felt oppressed by the expectations of her peers and media images. Today, western cultural places high importance upon appearance and this puts enormous pressure upon young adults; through fashion, make-up and unrealistic body shape. But she strives to fully accept herself as she is and to reject this false perception. She endeavourers to embrace the freedom of being her true self.

The sculpture's title is taken from a poem by Maya Angelou who describes how her self worth rises above the hardships which she and her ancestors experienced in racial suppression and slavery. At the close of each verse she says 'But still I rise': Whatever she has been through she has her inner strength and faith to overcome every trial.

This piece was carved during the 31st Olympiad in 2016 which was also the 80th anniversary of Jesse Owens winning 4 gold medals at the games in Berlin. In 1936 Hitler lambasted America for having black athletes in the games and stormed out of the stadium as Jesse Owens won the 100m gold. On returning to America, even President Roosevelt did not shake Jesse's hand, as was the usual practice. He wasn't properly recognised until 1976. Jesse said “The battles that count aren't the ones for gold medals. The struggles within yourself—the invisible, inevitable battles inside all of us— that's where it's at.”—Jesse Owens

Consider it all joy, my brethren, when you encounter various trials, knowing that the testing of your faith produces endurance. And let endurance have its perfect result, so that you may be perfect and complete, lacking in nothing. James 1:2-4 (NASB) 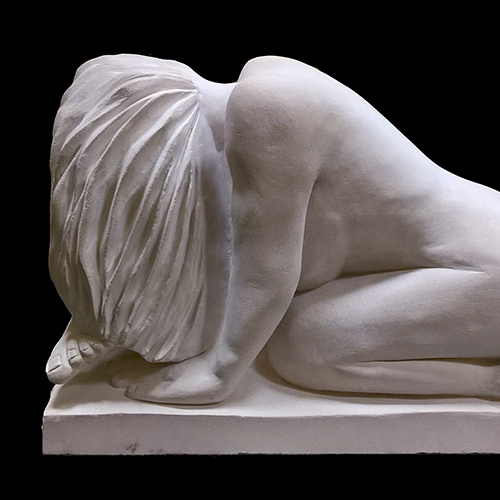 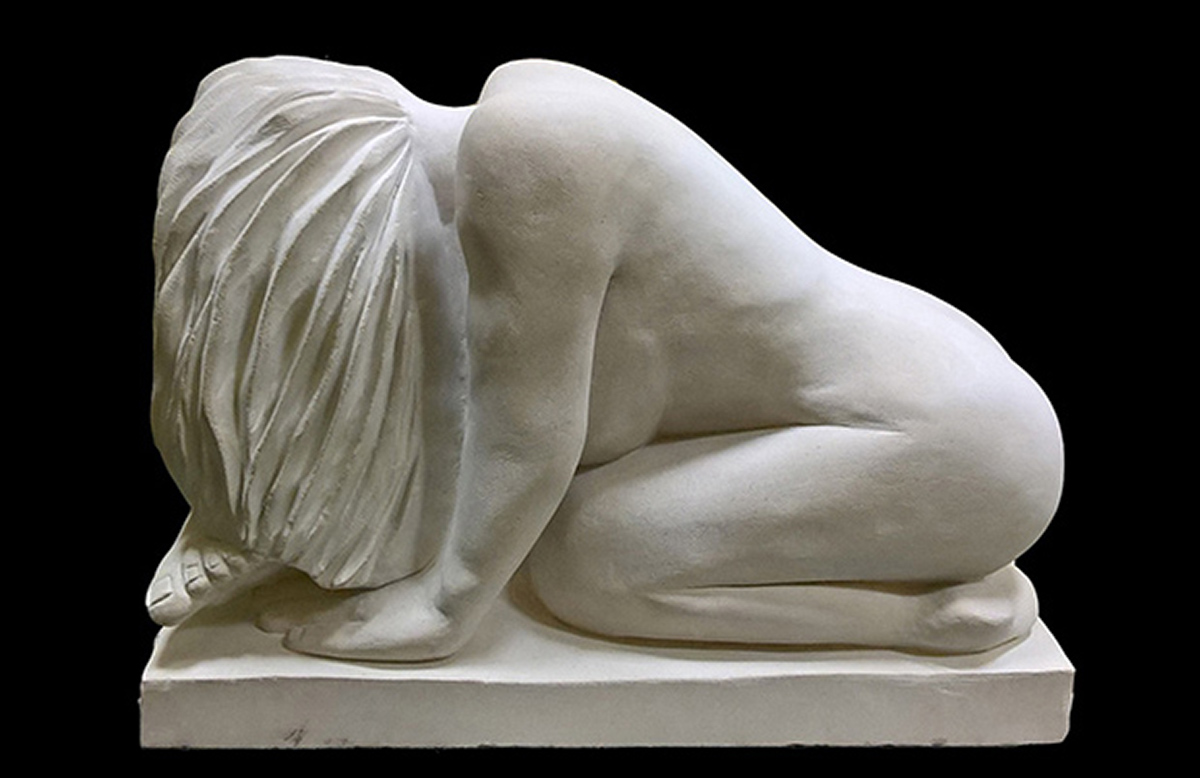 This sculpture is based on the story of a street lady who finds a new life. At the time I was carving this, the Rotherham sex trials were being held to prosecute men who had groomed girls for sexual exploitation. I had also watched a film called Nefarious where women around the world found themselves in abusive situations. Many were raised in culture that colluded in their exploitation but with outside help some found an escape and a new life.

The selling of young women into sexual slavery has become one of the fastest growing criminal enterprises in the global economy. Sex trafficking is defined as transportation of persons by means of coercion, deception and/or force into exploitative and slavery-like conditions and is commonly associated with organised crime. (Wikkipedia)

In Biblical times when a woman lost her husband she may have had no means of income and many were driven to sell their bodies to survive. Jesus encountered such a lady who wept and cleaned his dusty feet with her tears and dried them with her hair (Luke 7:36-50). Notice the foot of Jesus beneath her hair. Unfettered hair was seen as shocking, in a similar way to how nudity is viewed today. The Weeping Lady is the modern day equivalent of the nameless 'sinful woman'. Her nudity and her tiny feet show her vulnerability. Jesus accepted her as an equal, thus giving her status and she found a new life as she became one of Jesus followers. Jesus said her story would be remembered for all time.